The Common Squirrel Monkey is one that gets its name for looking very similar to the Squirrel. They are part of the New World Monkeys.

The tropical regions of South America is where you will find the Common Squirrel Monkey. They are spread out there all over the place so you will find them in Bolivia, Venezuela, and many other places. A population of them was introduced in Southern Florida about 10 years ago. They are doing very well there. Some have been located in Rio de Janeiro too in the last year. It is believed they may have escaped from an illegal pet trade capture.

They are usually found in the middle of the canopy of the rainforests. However, they will move up or down to find food and shelter if they need to. They enjoy the wetter regions where there are marshlands and swamps. Yet they can also be found in the savannahs so they are highly adaptable Monkeys. 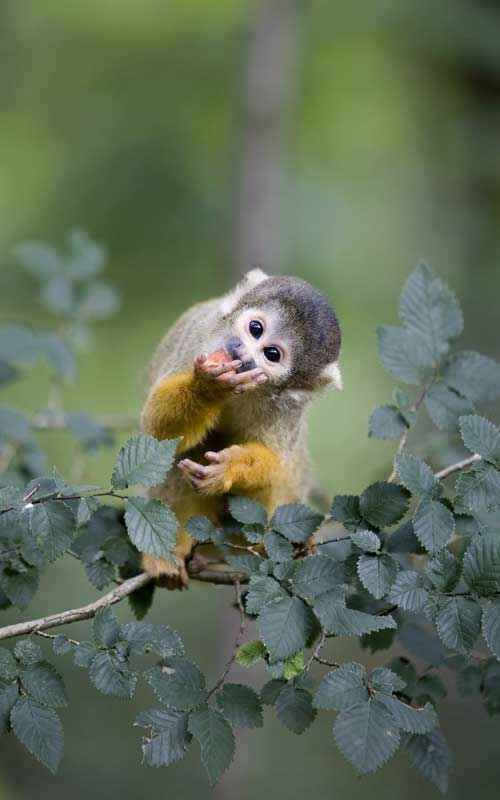 There is a good mixture of males and females that interact in the Common Squirrel Monkey groups. However, they have groups that depend on their role. For example the mothers of young spend time with each other. The adolescence will be around their peers. The adult males often group around each other and act out. When mating season is upon them though the males will be very aggressive towards each other.

The entire group is very social and depend on each other for protection. They are very vocal and have a variety of different sounds and non verbal cues that they use to bond with each other. The males often act in ways that try to impress females and that is why they will lavish them with attention or grooming efforts.

There can be groups of up to 500 of them in some places. As a result the social groups and structure has to be very organized. What may look chaotic to us though does work very well for this particular species of Monkey.

Tree Frogs are part of the diet for the Common Squirrel Monkey. They also consume insects, bugs, fruits, leaves, and twigs. They will eat what they can find in various locations without hesitation. Such as diverse diet makes it easier for them to thrive in a changing environment.

Water is something they need and they will get it from puddles on the ground. They also get lots of water from the trees and from the foods they eat. Nectar is something that they drink as well. 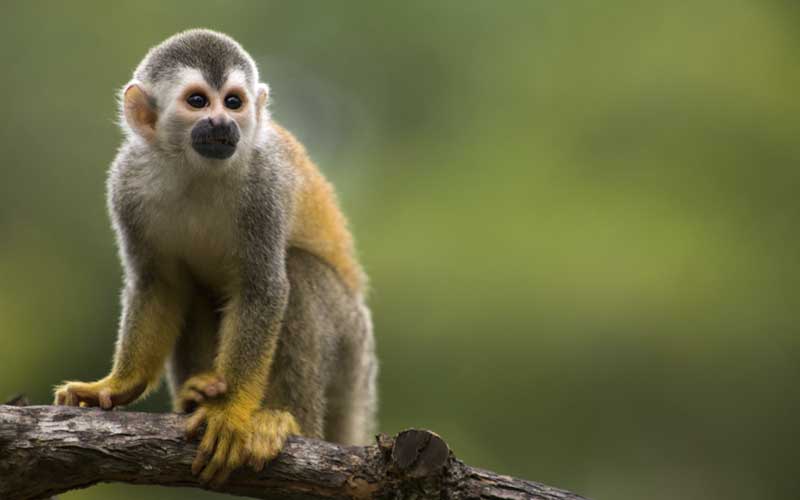 Squirrel monkey in a branch in Costa Rica.

The cycle of mating for the Common Squirrel Monkey can depend on what location where they live. They will typically mate when food is plentiful though. Females are very picky about who they will mate with. Sometimes an entire group of females will run a male off and none of them will mate with him.

The young offspring of the Common Squirrel Monkey are more independent than those of any other Monkey species. Instead of spending all of their time with the mother they will venture off alone or with small groups of other young. This type of activity though is part of why so many of the young die before they can reach the age of maturity.

The Common Squirrel Monkey doesn’t seem to be at risk right now of a future. There are concerns in some locations about their habitat being destroyed. These Monkeys are sometimes captured to be sold as pets or used in laboratories. However, they seem to be doing well and their numbers haven’t gone down much in the past several decades.