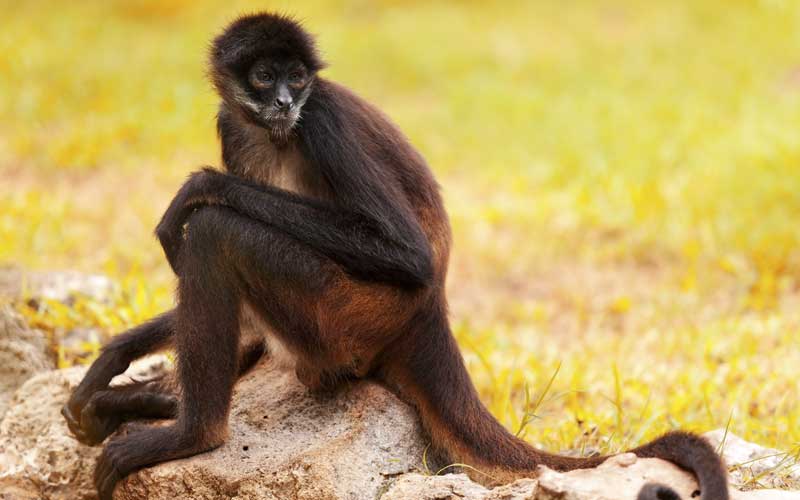 There are 7 known sub species of the Spider Monkey. They belong to the class of  New World Monkeys. They are believed to be the biggest of all the different Monkeys in that particular class. They can be used for various types of lab experimentation too and often are. This is because they are closely related to humans and there seems to be an abundance of these Monkeys.

With extremely long limbs the Spider Monkey can resemble a spider in many ways. That is where the namesake for it comes from. They may weigh up to 20 pounds with thin dangling limbs that are very strong. The tail is also very long and they have the ability to pick things up and hold them with that tail.

This is one of the few species of Monkeys in the world that don’t have thumbs. Many people don’t realize that as they think all Monkeys have opposable thumbs. They can be found in a variety of colors. Those colors often depend on where they live as well as what sub species they belong to. Such coloring can include shades of white, gold, black, brown, orange, and red.

These are very fast and agile Monkeys. They also have thick fur all over the body except for on their faces. There are legends about the Spider Monkey being evil but many experts believe that many people were just afraid of the physical appearance of this very peculiar animal.

Ancestors of the Spider Monkey fall into the Pleistocene group of species. Fossil remains dating millions of years ago show that they were once in Cuba and Spain. It is possible that Native brought these Monkeys when they came to the new world. By doing so these Monkeys had to adapt to a new environment. Their bodies had to change in order for them to make the necessary adaptations.

The evolution of the Spider Monkey is very hard to determine. Dental elements can’t be used from the fossils as the shape and size of them can be the result of the foods they eat and not the fact that they changed in design though the process of evolution. The development of the collar bone though which early fossils don’t have is of great interest to many researchers. 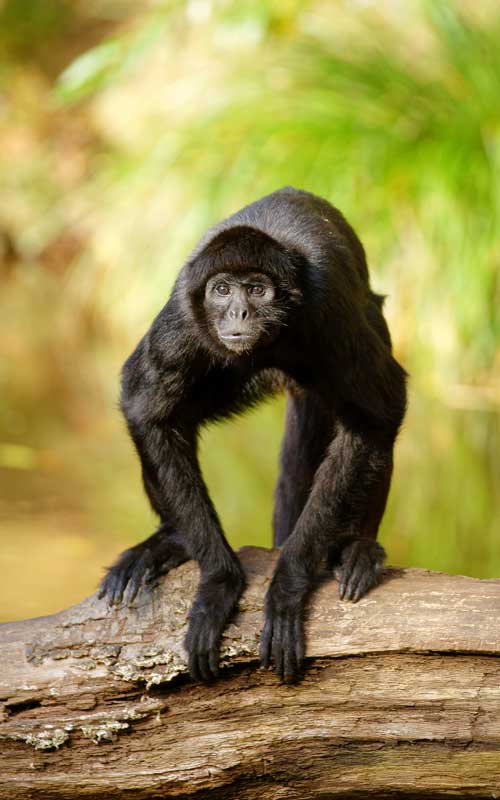 The spider Monkey plays a very important role in their natural habitat. They are one of the prime spreaders of the seeds from plants, flowers, and fruits. Without their help it would be extremely hard for such sources of new vegetation to grow in the forest areas.

These Monkeys live in groups of approximately 35 members. They are lead by a female who decides how large the group will get to become. Where there is lots of food and shelter she won’t mind it growing. She may have to decide that the group has become too large for the current environment to handle. If that is the case she will break them up into smaller groups and they will separate. By doing so there is a better chance that more of them will be able to thrive.

The Spider Monkey is well known for being a chatterbox. They depend on their vocalization for warning each other of problems, for bonding, for protecting their young, and even for protecting their environment. They are able to move quickly and will do so in order to stay safe.

Today the natural environment for the Spider Monkey includes the Southern tip of Mexico and areas scattered around Brazil. They live in areas that offer a huge rainforest so that they have plenty of home range area to cover. They look for regions that offer a canopy over them too. They try to find moist areas to meet their needs but will live in dryer locations if they must.

They like to be in areas that haven’t been disturbed. That can be tough though with humans around and taking over many locations. When areas have been fragmented by humans these Spider Monkeys may no longer want to live there.

There are many of these Monkeys living in captivity as well. They are huge attractions at zoos and draw in crowds. Their presence also helps to spread the word that protection of these Monkeys and many others is necessary if they are going to be able to survive into the future.

The Spider Monkey depends heavily upon fruits found in the natural habitat for their diet. Only about 10% of the foods they consume are anything other than fruits. They don’t nibble on these fruit items though. Instead they will open up their mouths and swallow them completely. Their digestive system is designed to be able to handle this with ease. It reduces the amount of time it takes them to look for food.

What is very interesting is that the Spider Monkey groups will have patterns that they follow for feeding. The dominant female will be in charge of when these feeding times occur. She will try to keep them on a schedule as much as possible. They typically will feed a couple of times as day.

When they have little fruit to consume they will try to find sap. They can also consume bark from trees. They have sharp nails and use it to peel away the outer layer. Then they can find moist elements inside of it that can sustain them until better food supplies are located. 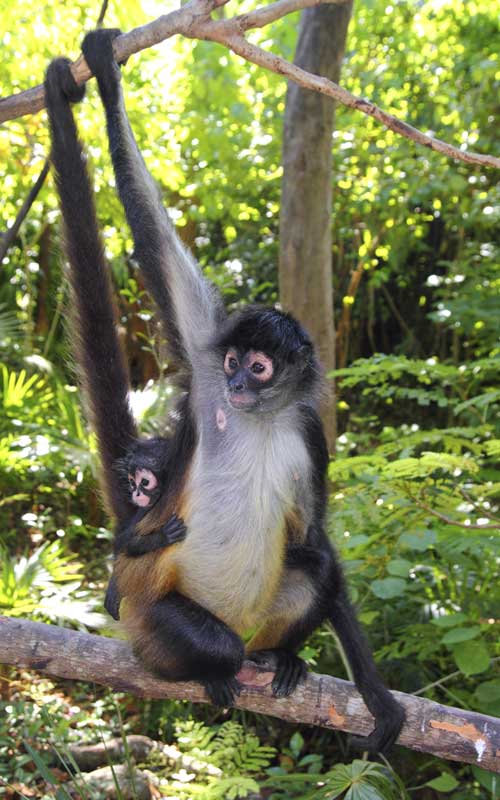 There is no set mating season for the Spider Monkey. The females are in control of when it will happen though. Studies show that when they have enough food they will go into an estrus cycle. If they aren’t getting enough food though they aren’t going to mate at all. This is why it can be tough to get the numbers back up out there in the wild for them.

The females are very particular about the male in the group they will mate with. They may turn away several of them before selecting one. After successfully mating it is about two moths later when the baby will be born. It is very rare for twins to arrive. The young are going to be well cared for by nurturing mothers and group members. They will feed from the milk of their mother for about 10 months.

The young will stay very close to their mothers until they are about 3 years of age. At that time both the males and the females have to leave. They will have to go find another group to live with or they will create one of their own.

There aren’t too many predators of the Spider Monkey. The main ones they have to be worried about are Eagles and other types of birds. Owls and Hawks often feed on the young so when they get older there is less of a danger. There are various snakes in this environment. Some of them kill the Spider Monkey with poison and others suffocate them.

In many areas the Jaguar is a prime predator of the Spider Monkey. They are amazing hunters and they are able to sneak up on them. They can also quickly climb into the trees without any problems. The biggest problem for these Monkeys though are humans. They continue to deplete the forest of trees and that is taking away the natural habitat for the Spider Monkey.