The Rhesus Macaque is also known as the Rhesus Monkey. It belongs to the Old World category and is among the best known.

These are small Monkeys with pink faces that don’t have any fur on them. They may be brown or gray in color. They have a long tail that helps them to stay balanced and for leaping.

The Northern portions of India are where you will find the Rhesus Macaque. Thailand, Vietnam, and South China are just a few of the places where they are found. They have the largest geographical location of any primate in the world other than humans. They enjoy open areas that are arid. However, they also live in the mountains at high elevations. They can also live in wooded regions as they have a diverse ability to live in many habitats.

In 1938 a large number of them were released in an area of Florida. They were moved there by a tour guide boat operator. It isn’t known how many of them remain though in that environment. However, most people believe that they were able to adapt to this new environment. The details on the story are hard to find though and you will find many different versions of the events online. 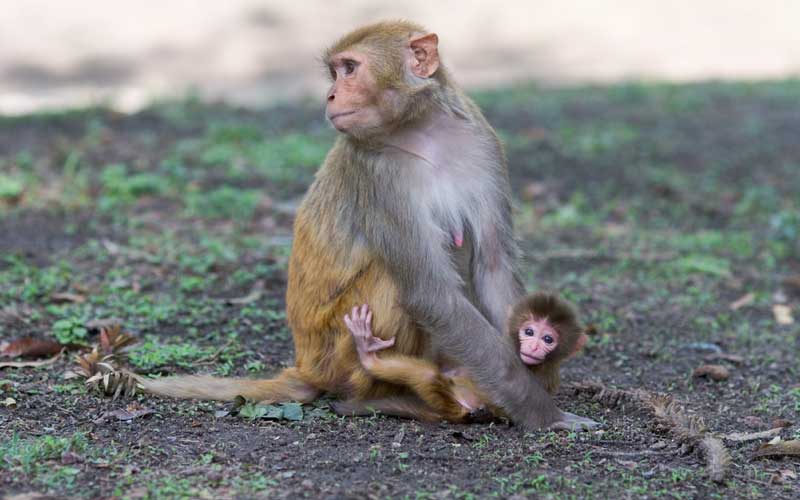 Morgan Island off of South Carolina is known to be home to some Rhesus Macaque that were deliberately moved there. This does indicate that they do very will in any type of environment.

Swimming is a common event for the Rhesus Macaque. They do it to help them cross between the islands. The young can swim when they are just a few days old. They are often found to have drown though in areas where the waters was moving just too fast for them to swim. They are active both during the day and at night. They will live mainly in the trees but also on the land.

The groups can have as many as 40 members, with there being about 4 times as many females. There is a complex hierarch that is through the females. Her young will have their lineage in the group based on hers.

Pine needles are part of their food supply. Roots, small insects, and leaves also make up their daily dietary intake. They are able to store food in the pouches of their cheeks. In many areas they have been known to go to humans for food that has been left out for them. They remember where to go for it though so now it has become a huge problem. Now villagers are trapping them and killing them to get them to stop coming around. 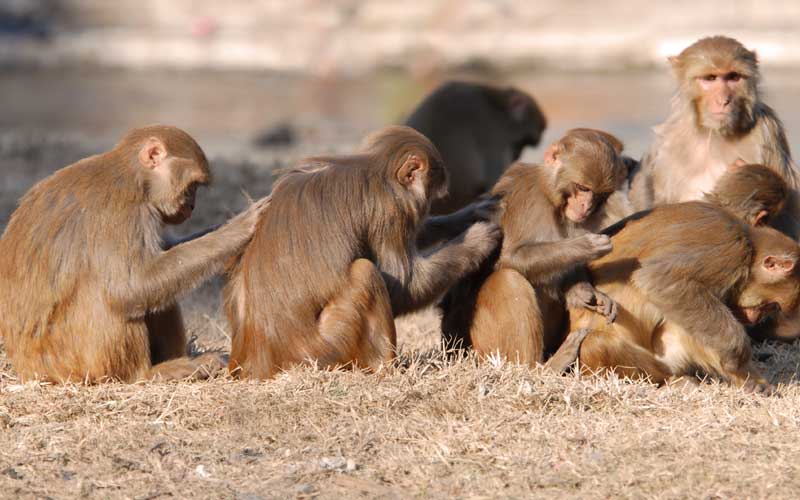 There isn’t a specific time of year for mating to occur with the Rhesus Macaque. As long as they have enough food and shelter it will be taking place. The females are mature around 3 years of age. It is about a year later for the males. After mating it takes about 164 days for the young to arrive.

They are well cared for by their mothers. They are taught how to be important members of the group. They are encouraged when they find food and when they call out to warn other members of dangers.

In many areas the Rhesus Macaque isn’t welcome. The stories of the villagers talk about young children being taken by them even though such an event has never been witnessed. They will steal food from the villagers and that can make them very angry. The numbers of them aren’t well known but they aren’t believed to be endangered at this point in time.