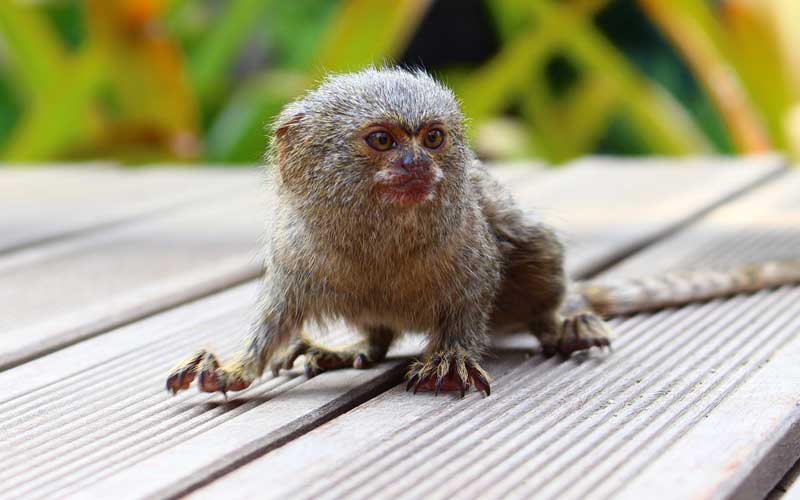 There are many names that you may hear the Pygmy Marmoset called by. They are known as the Pocket Monkey, Little Lion, and the Dwarf Monkey. It is all one and the same though regardless of the terminology being used. They are the smallest of all the Monkeys, and one of the very small primates in the world. They weigh less than 5 ounces when fully mature. There are 2 sub species that are known to exist.

Even though this Monkey is very small it has a body that is fluffed up. They are round and appear to be very fat. They really aren’t though but instead they are offering a natural means of helping them to look larger. They use this mechanism as a way to help them deflect being easy prey. They have the ability to cling to trees due to their sharp claws. They have a visual characteristic of tufts that grow out the sides of the face by the ears. They grow in all directions and get longer as the Monkeys get older.

Their brains are now much smaller than that of their ancestors. Yet they are very small primates? Many experts believe that the brain may have consumed too much of their energy. Perhaps with less food readily available they were able to make changes in the area of the brain so that they could save their energy for survival. This is only a theory though and something that has yet to be proven beyond the shadow of a doubt. 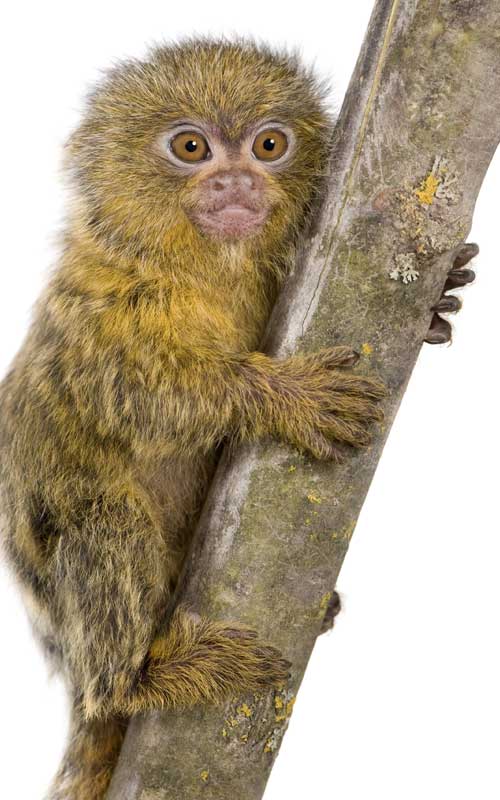 Communication is big part of the social aspects for life as the Pygmy Marmoset. They use their vocal calls to chatter, to tell of danger, to encourage mating, and to encourage their young. They make clicking sounds in addition to loud calls. They can make short calls for those group members close by. They can also make long calls for those that are further away.

These Monkeys don’t live in large groups, they will have 12 members at the most. They really do enjoy bonding and spend all their free time with each other. There show a great deal of sadness when one of their members dies. For the most part they are timid and get along with each other well.

They can be aggressive with each other if they need to. Yet they will fight to their own death if they have to in order for them to defend themselves and others in the group. Researchers still want to conduct more research in the area of the behavior of the Pygmy Marmoset. However, it is very difficult to do so without upsetting their natural environment.

You will find this species of Monkey living in a wide variety of areas. They include Columbia, Brazil, Ecuador, and parts of Bolivia. They will live almost all their live in the trees. It is very rare that they will be found on the ground. They are hard to pinpoint in their environment too due to how small they are. They blend right in and can stay well hidden.

They live in the very high elements of the trees too. They are often covered by a vast canopy of leaves and foliage there. They place their nests at the edges of branches so that it is hard for other living things to reach them.

The diet of the Pygmy Marmoset is very different from most other species of Monkeys. Theirs consists of sap and gum. That is what they will survive on if they are able to do so. They need a diet that offers them high amounts of carbohydrates. They may consume plants, fruit, and insects if they can’t get enough sap or gum.

You may be wondering how they are able to get the sap out of the trees? They have a very good system in place. They use sharp teeth and use them to penetrate the wood. Then they can drain the sap from inside. They are very patient with this process as it can be time consuming. This is why they may take many hours a day to feed.

There is no particular time of year for the Pygmy Marmoset to take part in mating. They can do so at any point in the year. They will be ready to mate as long a they have enough food and shelter around them. Yet when their natural habit is being destroyed those things aren’t always there. This means that they are being destroyed in numbers and that it is also very slow for them to continue adding new offspring.

There are usually a set of twins born to the mother when successful mating has taken place. There can be three or four of them though as well. These young are demanding in ways that other Monkey babies aren’t. They can be very fussy and need constant attention. They can’t eat much at once but they can get hungry every couple of hours. This makes raising them very hard on the mothers just like human babies can be for their own mothers.

There is a very high mortality rate of the young Pygmy Marmoset Monkeys. Trying to provide enough milk for multiples can be tough. There is also the risk of them falling out of the nests or off the body of the mother. Only about 25% of the young will live to reach the age of maturity. 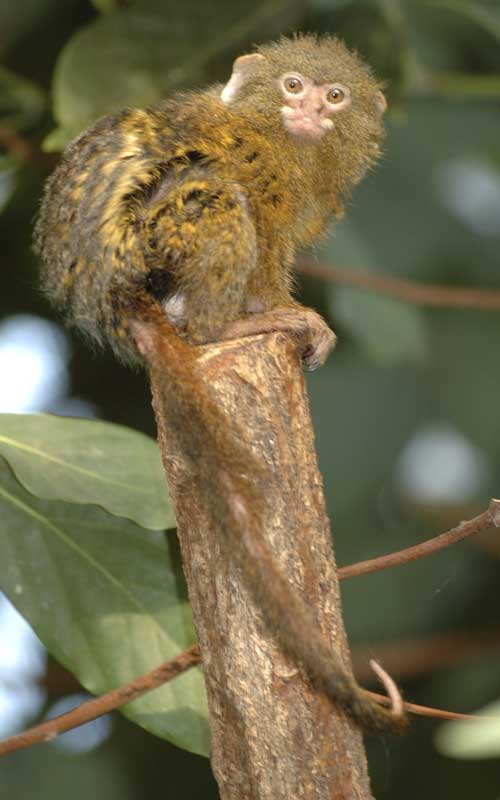 Pygmy marmoset in a nature reserve.

There are a few predators that the Pygmy Marmoset has in their natural environment. The specific ones will depend on the location where they live. Raptors are a type of bird that can come into the canopies and consumes them. This includes Eagles, Hawks and more. They have excellent vision and sharp claws so it is almost impossible for them to escape.

Snakes live in the same trees as these Monkeys do. Some of them are very poisonous. They will kill their prey by paralyzing them with the venom and then eating them. Others will coil around the body of the prey and suffocate them. Both of these types of snakes live in the regions with the Pygmy Marmoset Monkeys.

Wild cats are able to climb high into the trees. They have bodies that are build for such movements so it is easy for them. They are very skilled hunters and find these small Monkeys to be a very good meal, especially when they are struggling to find larger prey.

One of the ways that the Pygmy Marmoset defends itself against snakes and wild cats is to place its nest far out on the very thin and light branches. They are small and weigh next to nothing so they are secure there. Yet these larger animals are too heavy for the branches to hold them. They aren’t going to put their own life on the line to get a meal.

Humans are a huge problem for the survival of these delicate Monkeys. They continue to destroy their natural habitat. They also continue to take them and sell them as pets around the world. There are efforts in place to protect them but that still hasn’t stopped those with an agenda of their own from proceeding.