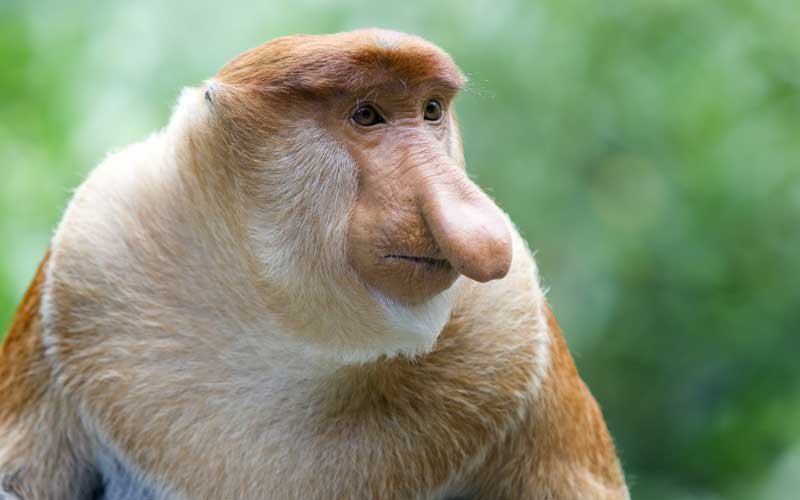 The Proboscis Monkey is also called the Monyet Belanda Monkey, which means the long nosed Monkey. It belongs to the Old World classification. In the Egyptian Culture they were worshipped as a very unique animal and believed to be special to the gods.

The long nose if this Monkey is a very distinct feature that separates it from all other species. In fact, when people first noticed it they didn’t even think it was a Monkey due to the look of it. The males have a nose that is even larger than that of the females. It is believed that a larger nose is going to attract females. The nose can be up to 7 inches long.

The males can be up to 56 pounds with the females barely about 20. This difference is larger than with any other primates in terms of their size. They have a reddish brown coloring and the limbs are gray in color. These Monkeys have a very large stomach too.

The Island of Borneo is the known location of the Proboscis Monkey. They live in the lower elevations of the forests and around the swamplands. They are found in the Danau Sentarum National Park where they are well protected from poachers. They are well spread out in their habitat. 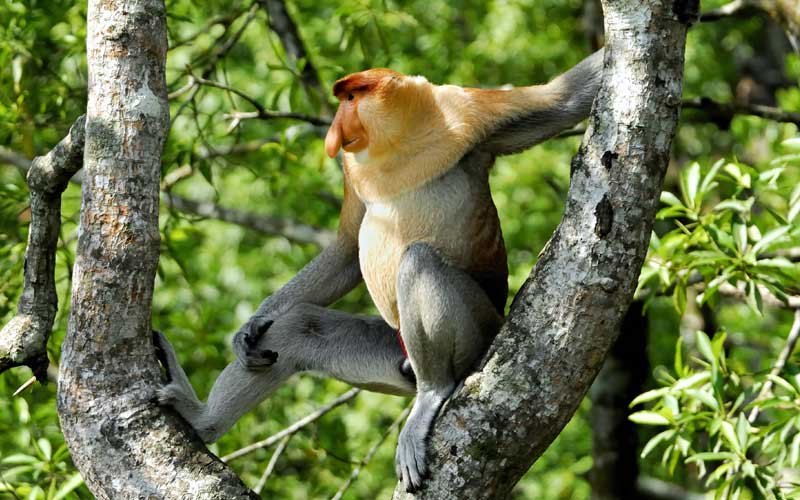 The warning calls of the Proboscis Monkey are very loud. It is believed that the large nose allows for the sounds to be bolder than that of other Monkeys. They can live in groups that range from 10 to 30. The Monkeys don’t always stay in the same group though. They can move from one to the next frequently. This is very different from most other groups of Monkey species.

They are able to swim very well even in deep water. This allows them to move from one island to the next. It also offers them a place to cool off and for having some fun playing around. They have been seen walking in an upright position along the trails in the forest. They do so in a single file.

The males create harems within the cultures. This allows the males to have several females for socializing and mating. They also help with the care of the young offspring.

The Proboscis Monkey doesn’t eat more than other Monkeys but it does look like it. That is due to their body shape in the stomach region. They consume mangrove shoots and leaves. They also will consume small insects. 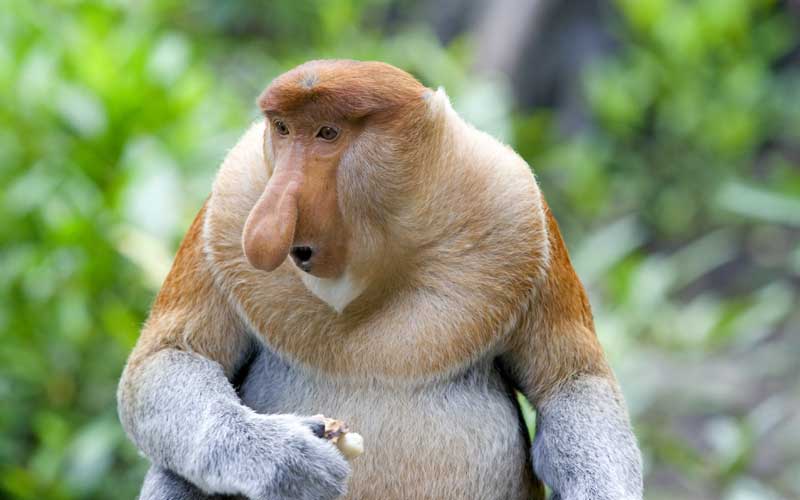 Females are the ones that initiate mating, and it can occur during any period of the year. They will typically do so only when there is plenty of food. The young are born about 160 days after mating occurs. They have a bluish coloring to their face at birth but it will soon turn pinkish.

The males will have to leave the group when they are about 1 ½ years of age. The females though are able to remain for their entire life if they would like to. The Proboscis Monkey has a short life span in the wild of about 13 years. In captivity they may live up to 30 years.

The extensive loss of vegetation has led to a steep decline in the number of Proboscis Monkeys in the wild. Today there are only about 1,000 of them that remain. As a result they are strictly protected by the government of Borneo. There are stiff penalties for those that kill them. Still, some poaching does occur and it is hard to track down those responsible for such efforts.