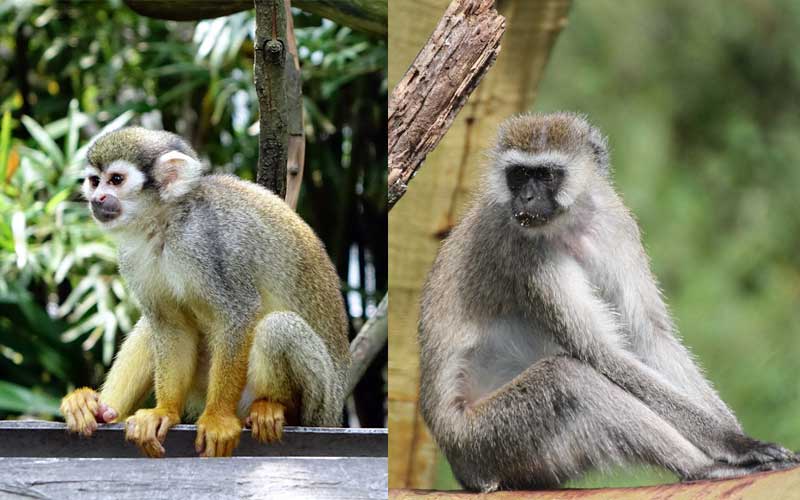 First, some history about when this all started. It is believed that approximately 40 million years ago there was a significant split among the Monkeys in the world. They New World Monkeys were living in South America and the Old World were living in Africa along with the Apes.

It is believed that the New World Monkeys began the process of migrating to South America. They may have floated there on rafts that they created out of various forms of vegetation. Giving the high level of intelligence of these animals it could have been the result of any number of things that they used to cross the Atlantic Ocean.

Of course the level of water and the overall vegetation was very different at that time than it is today. You can’t imagine them trying to do something like that with today’s design but it would have been very possible back then. Odd features such as a stub for a thumb or even no thumbs are also common among Old World Monkey species. You don’t find those variations with the New World species.

Old World Monkeys tend to be larger in overall size. They have fingernails that are flat instead of sharp. They also have nostrils that are narrow and point downward. The checks feature padding in them. They also have buttocks without hair but with padding that they can sit on. They can be found both in the trees and on land. Two common Monkeys that fit this category are the Baboon and the Snow Monkey.

New World Monkeys spend most of their time or even their entire lives in the trees. This is why they need longer nails that are also very sharp. They don’t have the cheek pouches or the padding on the buttocks. They have wider nostrils that are round in shape. Two common species here are the Callimicos and the Marmosets.

Old World Monkeys are only able to see the world in Black and White. However, New World Monkeys see in color just like humans do. It is believed that a genetic mutation over time is what allowed for this significant change to occur. However, all Monkeys seem to have good eyesight regardless of if they are able to see color or not.

It is believed that the amazing care we see the Monkey young receiving is part of the New World Monkey habits. This is an area of great debate though. There are many experts that believe all primates have the desire to be able to care well for their young and to form strong bonds. Others though feel that the intelligence of these animals matured over time as did their parental instincts.

Regardless of whether they belong to the New World or the Old World, all Monkeys are fascinating creatures. They all have tails, fur, and they have large ears. They may be different sizes and they may have different habits when it comes to their social structure. Yet there is no denying that they all have characteristics that will forever bind them. Some of the Monkeys have been able to evolve over time and continue adapt to new environments. Others though tend to have problems due to their natural environment being depleted at a rapid pace.