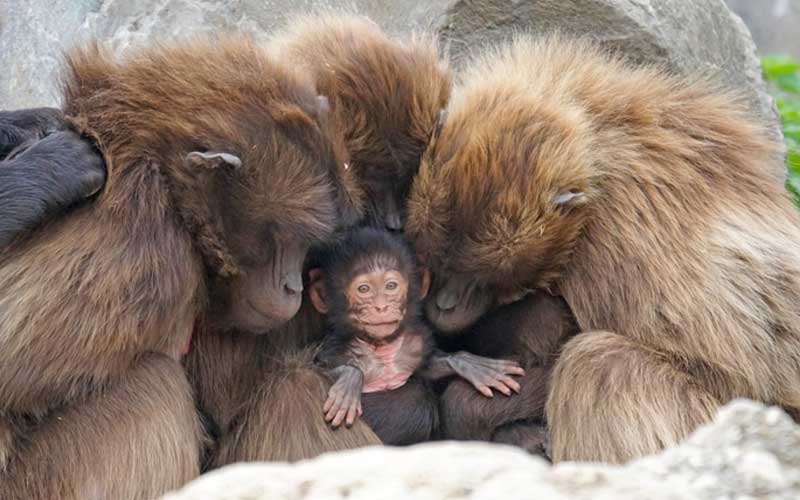 The reproduction process can be full of rituals for the Monkey. Those rituals will depend on the species though. They generally will become mature between 4 and 5 years of age. The females are attracted to the biggest and strongest males. Those are going to be the leaders of the group. They are the only ones that will breed within that group.

This is why there can be plenty of conflict in a group of Monkeys. The males may fight with each other to be the dominant one. Males may leave a group when they mature to go create their own that they will be in charge of. A lone male may challenge the leader of a given group and then take over if he winds.

Should that occur one of the first things he will do is kill all of the remaining young. He wants the females to be ready to mate with him. He knows by getting rid of the young that they will be more likely to do so. There is no set breeding season for Monkeys. As long as their basic needs are being met they will take part in it.

When a group of Monkeys is struggling to find enough food or to find shelter though they will be stressed out. As a natural mechanism that is build into their instincts the females will stop going into estrus. They won’t start mating again until there is adequate food and shelter available. This is why it is so hard to get the population of many Monkeys species to increase.

The age of maturity can vary among various Monkey species. Only a handful of them mate within the first couple of years of life. Those are often the smallest of the species. Most of them range from 4 to 8 years of age. The females of any given species tend to mature approximately a year earlier than they males.

Once mating has occurred it is approximately 160 days until the young arrive. It is very seldom that she will have twins but that does happen occasionally in the wild. A couple of the species though always have twins which is very different. The young are born from the body of the mother. She will immediately hold her young and bond with it.

Monkeys only give birth every couple of years. They are excellent at carrying for the young. The females will often work as a unit to care for them. The males will often pitch in and even be seen playing with the young. In many groups of Monkeys the young will inherit the social hierarchy as their mothers. That will be where they are placed in the order of things both as a young infant and when they are mature.

These young Monkeys spend lots of time on the backs of their mothers or in her arms. She looks adoringly at them just like humans mothers do. She will put her own life on the line to protect her young. They can be seen playing with her, being nurtured, and even laughing.

Socialization is a big part of the learning process for them. These young Monkeys take in plenty through observing. They are encouraged by their mothers to make calls, to find food, and to play. They can also be scolded for bad behaviors so they can learn the limits just like humans set in place for their own children. Monkeys often do well in captivity so with many of the species in danger due to low population there are breeding programs in place to help try to bring those numbers back up.