The Blue Monkey is very unique in how it looks but it isn’t blue. It is also know as the Diademed Monkey. This species belongs to the Old Monkey World. There are a couple of known subspecies.

There is very little hair on the face of the Blue Monkey. This can give a bluish color which is where the name comes from. The body is an olive color with patches of white and black on it. The top of the head is dark in color. During some times of the year the olive color can become grayish to fit their surroundings.

They are found in the older parts of Africa. Congo is a big part of where they have been found. They love the environments of the evergreen forests. They seldom come to the ground and will stay often in the trees as long as they can find food sources. They live in humid areas that offer lots of canopy covers.

What is interesting about the social structure of the Blue Monkeys is that they are mainly females. The males leave once they are mature. This leaves only one dominant male that will be mating with the females. There can be many young living in a given location too. It can be hard for the young males to venture off alone and find a habitat where they can create their own group.

Both play and grooming are common methods of socialization within the Blue Monkey groups. The males have little to do with the young though. They tend to stay close to their mothers or their peers. The Blue Monkey is very territorial and that often means these young males have to be on the outskirts to find a place to live.

To help them be more successful they often will challenge the dominant male of another family. If they are able to defeat him they will be able to take over leadership of that family. This offers both a place to live, socialization, and food supplies. The males often take this chance so that they can increase their chances of survival.

There are plenty of types of food that the Blue Monkey is able to consume. They mainly consume fruits and figs. More than half of their diet consists of them. They also will eat insects, leaves, twigs, and flowers. If they aren’t able to find enough food they may consume bark from the trees. 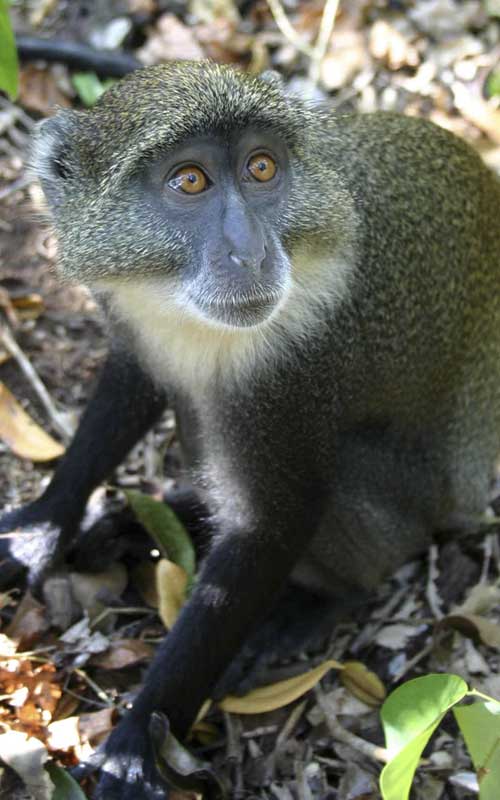 The females who are mature will come into estrus when there is plenty of food during the rainy season. The young will be born 5 months after mating. They are typically all born within a few days of each other. The groups can have up to 40 members and the females usually help to care for all of the young, not just their own. They will only have offspring every couple of years.

Some of the older females who may have lost a baby or who can no longer have them may become aggressive. They may try to keep a young one that belongs to other mothers. When young have become orphaned the group will try to care for it a long as their own needs can still be met.

The Blue Monkey is used for bushmeat so it is often hunted. The villagers rely on this meat for their own survival. The natural habitat of the Blue Monkey continues to be destroyed. As a result their numbers have plummeted. This has led to conservation efforts to help them try to regain some of their early population.