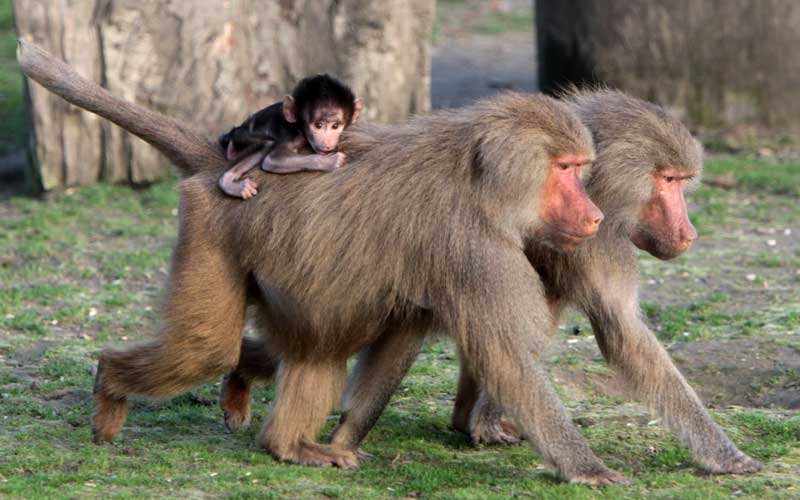 Sharing 91% DNA similarities with humans is the Baboon. This particular Monkey is often argued to be an Ape instead. However, science has placed them into the area of being a Monkey based on a variety of contributing factors. There are 5 species of the Baboon and they are all part of the Old World Monkeys.

Of the Old World Monkeys, these are the larges of all primates in the world with the exception of human beings. They can weigh up to 90 pounds with the smaller ones being about 30 pounds. The males tend to have at least 10 pounds on the females so it is very easy to tell the difference between the males and the females when you are looking at them.

The Baboon certainly does have many characteristics that are different from other Monkeys. For example almost all Monkey species have a very flat nose. This one though features a very long and large nose. It consumes most of their face and so you can’t overlook exactly what type of Monkey it happens to be. The males have a nose that can be up to 7 times larger than that of the females. However, both genders do have a nose that you can’t help but notice!

You will also notice that the Baboon features teeth that are extremely sharp compared to other Monkeys. They don’t have a diet that is very different so what does this offer them? It certainly gives them an appearance of being mean and that could be and advantage when it comes to predators. Yet that has also had a dark side to it in society as many cultures think that the Baboon is evil.

The Baboon spends lots of time sitting on his buttocks, it appears to be heavily in tough. They have a padded area on the buttocks that is free from hair. It is thick and provides them with a very comfortable position for those long hours of sitting and gazing around. The coloring for this particular type of Monkey can be very different based on where they are located.

Some of them feature a grayish coloring. Others are black or brownish. All of them have a white mane though that covers them around the head. You have to take a close look at them to fully appreciate how their body all comes together. They are very strong and powerful primates. 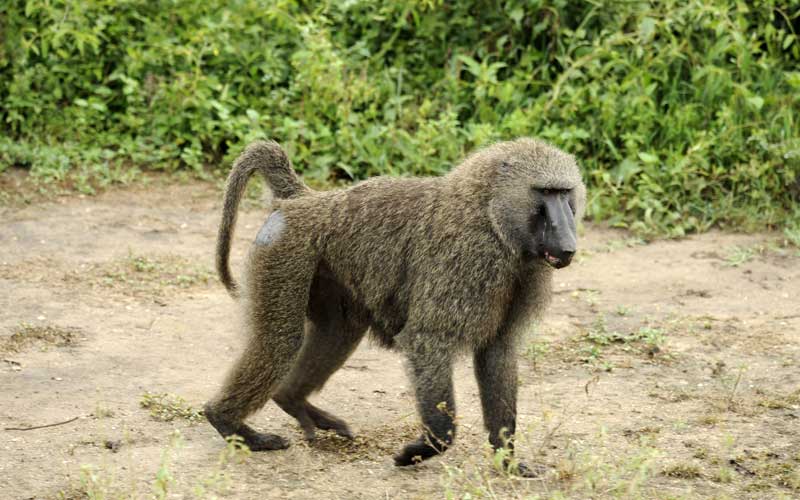 There is plenty of debate over the evolution process and the Baboon. The fact that they are so closely related to humans often scares people. Yet it is also fascinating and there is hope we will one day find the link in ancestry that ties it all together. Fossils that are about 8 million years old have been found of the Baboon. However, they don’t tell us much about changes that occurred or why. These fossil remains though are larger than the Baboon today so that is something to take a closer look at. The savannah Baboons have evolved though to where the males are stronger and more aggressive than their ancestors.

Baboons tend to do what they want when they want! They can sleep in the day and look for food at night. They can be active at night and sleep all day long. They can even do both with short naps in between. It is believed that their schedule has to do with what they have readily available around them. Those that live close to people may go out at night to get the goats or sheep as they can’t get to them during the day.

The groups of Baboons can be very large. The smallest size of them is about 50 members. However, they can have up to 250 members. They have a very complex level of social organization that takes place among them. This helps them to be able to keep things from becoming chaotic.

Part of that successful organization comes in the form of them being able to develop sub groups. They have mini cultures that occur inside of that larger ones. There are many dominant males and they have several females. They don’t allow these females to venture too far from them either.

Social activity is a big part of belonging to a Baboon family. They spend time chattering among themselves. It can sound very loud and chaotic when you hear them in their environment. Yet to them it means that there is safety, they that share bonds, and that they are well cared for. Without such social aspects of the group they would lose their desire to thrive.

There are many fights as well that can occur within such a large family. They are internal and often among the males. These males are often fighting over the females that they want to be part of their harems. Sometimes females will fight with each other too over the young or over food. There are times when those that seem to be consistent trouble makers are forced out of the group. The decision is make to help keep the peace for the remaining members of the group.

This particular Monkey calls both Africa and Asia home. They tend to live in the tropical locations most of the time. However, they are also found living in many dry areas. They are versatile and spend a great deal of time living in trees. They also spend time on land too though. They have been seen in many different types of environments. Changes to their environment doesn’t seem to bother them.

Today they only have 2.7% of their forest land that they can rely on. When you consider that 25 years ago they had 40% forest region you can see how they have had to adapt to changes in order to survive.

Baboons consume a variety of different plants and leaves. They are slow eaters and so it man take them many hours per day to be able to get enough eating done. They will also consume a variety of insects as well as small animals. They have been a problem in some areas for ranchers due to that reason. They tend to eat what they can when it is abundant to store fat for when it isn’t.

Social ranking is what will determine which of the males in a given group. They will be able to breed with the females that are part of their harem. There can be several days between each of the females being in estrus for the convenience of the male. He will have time to rest between being with each of them.

Mating is very gentle with the Baboons including the males bringing them food, gentle touches, and hours spend to groom the females. This is all part of ensuring that the female will be receptive to the mating when it occurs.

There are quite a few natural predators out there that the Baboon has to be concerned about. They include various wild cats – Leopards, Lions, and Cheetahs. They also have problems with the Hyena. The younger ones can become prey of birds including the Eagle.

Humans continue to be the largest problem for them. They are heavily hunted due to the way they look. The culture in these regions has them pegged as being evil. Crops have to be grown and livestock needs to graze for the forest continues to be destroyed to make room for those to occur.